The recent story of Dixie and Duncan, two littermates living with a medical condition known as Megaesophagus (ME), who were reunited after about 15 months apart has warmed all our hearts within the BAM family. We hope you enjoy watching just the highlights of their story here. And to give you a little more backstory that could've made for a short film rather than a 6-minute video, read on:

We continue to be floored at how many instances of luck or divine intervention and parallels these two sweethearts have lived from the start. One of BAM's volunteers happened to be visiting a local vet clinic when she overheard a family discussing their sick puppy. Trying not to be too pushy she interjected and offered BAM's contact information to them. You see, after weeks of having their new puppy, Dixi,e be sick and throwing up nearly every meal, the veterinarian had officially diagnosed her as having ME. For Dixie that means that she has an enlarged pocket on her esophagus. It traps food and water before it makes it to her digestive tract. It is almost constantly sloshing and making her want to regurgitate. And that can be very scary because aspirating any of that food or fluid can lead to pneumonia. Dixie's first owners were gracious enough to realize Dixie's life still had value and with proper care she would have the quality of life we would all hope for any puppy. But they also knew they weren't able to support those needs and that's why they decided to reach out and relinquish her to BAM. What we didn't know at that time is that her brother Duncan was suffering from his own version of ME and had nearly been put down my his first family. The poor pup had been so sick they didn't think it was right to make him suffer. But like Dixie's first family, Duncan's veterinarian thought there may be hope for him and suggested Best Friends Animal Sanctuary and their experienced staff might intervene with his care.

The parallels continued in that Dixie was transported across Utah to her new foster-to-adopt home on the exact day Duncan's new family, Harold and Debbie from Missouri, announced they were officially adopting him. Another twist of fate was that BAM's Program and Development Coordinator, Aggie, was on vacation (out of the country!) when she spotted Dixie posted online as a stray hold in a Northern Utah shelter. We'll never know if anyone else would have had the timing and knowledge on their side to put the details together, but we are so thrilled to have found Dixie in her time of need. Because BAM had posted Dixie's story online and created a Facebook page for her as a puppy Duncan's mom Debbie had been aware of BAM having had her boy's sister. And she wanted to know more about the other littermates. Debbie contacted BAM to learn about Dixie's adoption status and wellbeing only two weeks before Dixie was posted as a stray. Because of that contact, BAM's Foster Care Coordinator (and Founder and VP and Dixie's former foster mom), J, sent a quick mesage to Debbie as soon as we knew Dixie was returning to our care. What had been missed in all earlier communication is that Harold and Debbie weren't in Utah and couldn't easily foster Dixie. The distance from Missouri to Utah hadn't phased them with Duncan's adoption, however, so within about 15 minutes of hearing about Dixie needing a new home they had already decided they would be making the days-long drive out to Utah one more time. This time to pick up their new little girl. Harold and Debbie adopted Dixie one year and 2 days after having driven to Utah to adopt her brother. Though it is now clear the ME has manifested uniquely to each pup, the treatment and attention to care is much the same. What we hope people will learn from their story is that careless backyard breeding can lead to tragedy in the blink of an eye. Whatever power it was that got Duncan into care at Best Friends Animal Sanctuary and Dixie into BAM's foster program, we have no idea what came of the other two puppies from their litter who were also struggling with this disorder and we hope they have not suffered. Thank you to everyone who has been so supportive of BAM's pet welfare, adoption, and community programs in the past and as we move forward. Your support makes "Happy Tails" like this one possible! 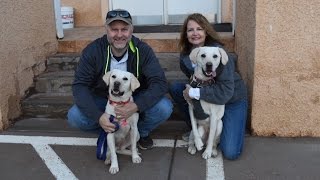